43 Squadron Phantom, bursting between the clouds, near sunset

Modern warplanes, with their low visibility grey finish, present something of a problem for the artist. You have to contrive a background against which the mid grey colour will show up! One technique is to backlight the 'plane, which makes the picture an aircraft silhouette against a bright sky, or you have to set it against a dark background-in this case a break in the clouds.
Here, a 43 Squadron  (the "Fighting Cocks") Phantom from Leuchars in Scotland is shown with the 'plane and the clouds lit warmly by the pink glow of the settting sun, and with other parts of the 'plane and clouds illuminated by  the cool blue light of the darkening sky, thereby enabling me to get some colour contrast into the 'low-visibility' grey. 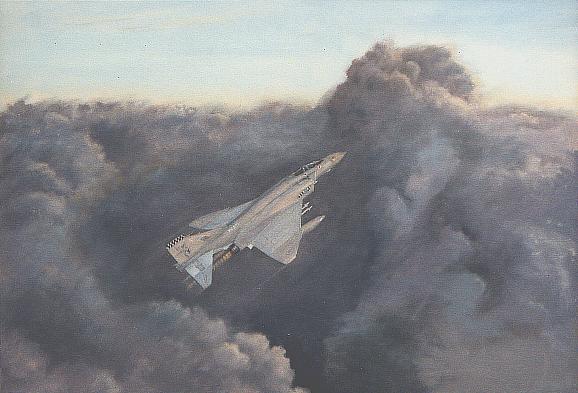