B-17s, coming into Lavenham, Suffolk, after a raid deep into Germany

This painting, available as a Limited Edition Print, was done in something of a hurry to meet an advertising deadline, and I have always regretted so doing; you always need to live with a painting for a while, before deciding it is 'finished', but I suppose hindsight is a wonderful thing, and now I refuse to be railroaded into rushing to meet an impossible deadline.

The imposing tower of Lavenham Church is in the background.

The painting attempts to illustrate the feeling of relief, the 'We've made it again, safe and sound' feeling that all bomber crews felt as they came in to land. The combination of stormy clouds and slightly 'quieter' skies in the distance try to echo these feelings, and one of the US airmen who bought a print said, unprompted (bless him!), that the painting conveyed to him the feeling of relief at having 'made it' one more time. His name, and I kid you not, was Karl Marx, but not, as far as I know, the Karl Marx!

The painting was also done as a tribute to the American Airmen that fought, and sadly died in horrifyingly large numbers, in order to combat the Nazi menace. Incidentally, since many Americans were of German extraction, I have noticed that American literature about the Second World War tends to refer to them fighting 'the Nazis', rather than 'the Germans'.

The print, which measures approximately 20"x16" image size (plus, of course, a border with the print number and signature)
costs £35.
Please phone me (sensible UK times please) on Cambridge (01223) 292266 to order. Price includes p&p in UK. 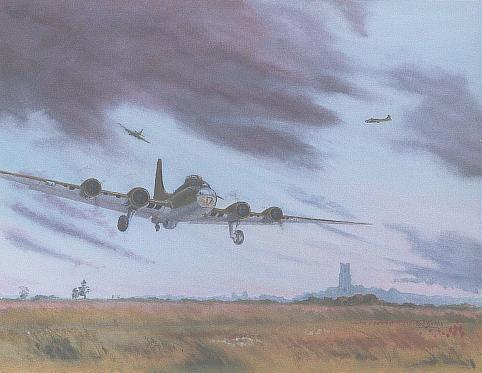