The F-89D always fascinated me, with its low aspect-ratio wing, and twin centrally mounted engines, and a photo in a magazine of the engines running up at nightime made a big impression on my then young mind (my mind is still young, but is carried around by an increasingly creaky body).
I designed and built a 'Jetex' powered model, which flew well, and, when I saw a photo of F-89s belonging to the Alaskan Air Guard painted in their rather fetching pink and green livery, it made enough of an impression to cause me to seek out that photo, years later, and use the details for this painting.

At a 'critique' session by the Guild of Aviation Artists, John Blake, who did many of the commentaries for the Farnborough Airshow, said that it was 'a nice little painting. There's only one thing wrong with it, and that's that it makes the Scorpion look as though it flew nicely'.

Well, my model did fly nicely!

Apparently, the Allison engines were the prime cause of grief to F-89 pilots, rather than the aircraft itself. 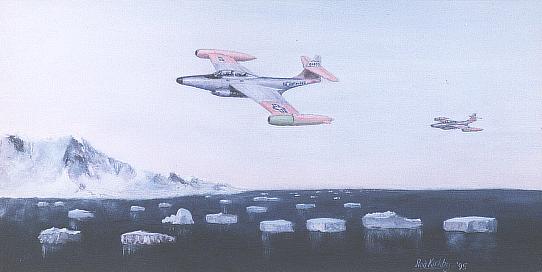